This HERE was a fun project our principal event producer, Anca, got invited to participate in to discuss Virtual Home Offices and the best equipment and practices related, along a few other thought leaders part of two separate Think Tank Groups who are just as immersed in virtual events as she is.  This effort was planned and produced by the Virtual Meetings & Events Association (VMEA) in an effort to promote collaboration, connectivity and to cultivate new ideas and best practices that educate and empower event planners, producers and attendees in the meetings and events space. This video here is one of three from this series and focuses on virtual event attendee’s best practices.

Be on the look out for the Speaker (see bottom of page) and Producer Virtual Home Office recommendations and then a summary page of equipment discussed following. 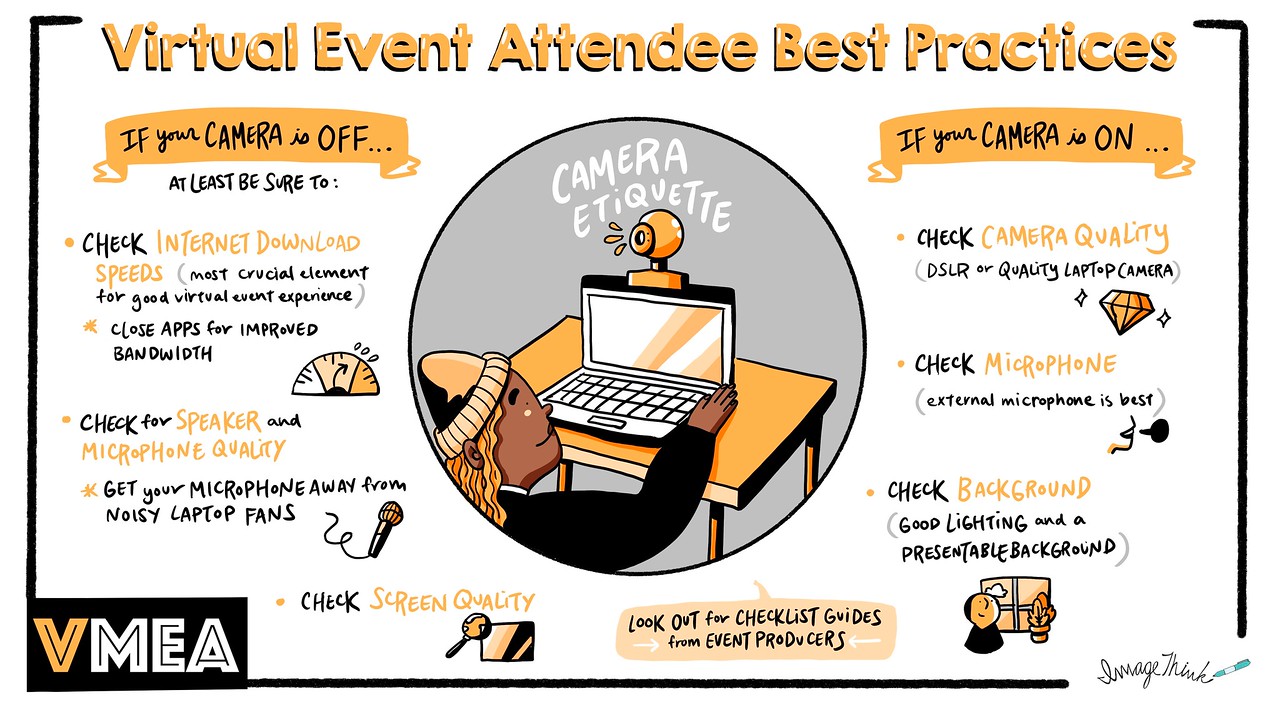 Below is the video transcript:

Mark Michelson (moderator): The real goal here is to try to understand, uh, what kind of tools and what kind of software hardware have you invested in. And what do you find is working for you? It’s the most important thing you have in your kit? And then, uh, what are some things that you’ve learned along the way about purchasing stuff?

I know this is right up all of your

Bill Yetman: So internet. Performance. Tends to be the most important aspect of what people remember. Uh, you can have the greatest content in the world and have a crappy camera and people are still going to, if you, if you’re going voice, still get something out of that. If your internet is powerful,

Ella Glasgow: Unless they are on Zoom then they don’t need a camera.

So, uh, so I think the [00:01:00] biggest thing is that they have an internet connection and that for the audience member doesn’t have to be as great a quality, although. They’ll obviously have a better experience if their download speed is better.

Anca Trifan: Try to get them to connect to a wired connection to the modem, router, whatever they have. Truthfully, that’s been quite a challenge because a lot of people don’t even realize they actually have modems and routers in their houses.

Sabrinah Teekah: Do you have a lot of windows open sometimes? Like I do, um, shutting some of those things down so that you can actually get. Better

Jerry Wang: reception. It’s like, how do you educate a little bit, know what the minimum requirements they have prepared before they’d experienced?

Christina Whitehead: you go, okay, these are the things that you want to make sure before you joined the training conference, um, in this case, because it’s going to be through zoom. Make sure you update your zoom app. Here’s how to do that.

When you get on here’s, how to test the speed of your connectivity. Um, here are a couple of [00:02:00] different sites where you can do that. If you’re having speeds that are under 10, you know, um, megabytes per second, here’s, here are some things that you can do in order to help increase that and run another speed test and recommending that they do all of this before they actually log on for the conference starts.

Katie Fawkes: When I actually went with speakers for, for number two. And because I do think it varies by platform and there are certainly a lot of audiences and attendees that may opt to not turn on their camera because they’re taking notes or they’re, you know, they’re multitasking and doing a bunch of other things.

I think the rise of platforms like clubhouse and some of the audio only. Spaces are starting to show that people want to able to consume content while doing other things or taking notes or not necessarily being on camera. So I think the ability to hear really well and not have any kind of buffering [00:03:00] or disturbances are a big focus for attendees, because

Bill Yetman: I think Katie brings up a really good point. There are a lot of, um, laptops whose microphones are really close to the fan. And soon as the fan starts to try to cool the computer you’re actually catching noise from the fan.

Mark Michelson: Yeah. By the way I think you win the fanciest microphone

Carey Smolensky: award. It’s also not the most expensive by the way. It’s, uh, it’s a pretty cool, uh, Mike and I’ve got a few different options, but just, just like anything else,

Anca Trifan: Are you saying you’re just going after the looks? :)) Is that what you’re saying?

Carey Smolensky: No, I’m saying it, it it’s both it, uh, it works and, uh, it gives the salads on it. It just looks

Jeff Veley: a lot of folks will be in an echo-y room and they make the mistake I say of choosing a condenser mic. Okay. So for example, the Yeti is a very forgiving Mike when it comes to audio or Mike technique, uh, because you can. You know, you don’t have to be perfect distance. If I pull away from this thing, you’re going to miss a lot. I just, I just

Michael La Kier: find, um, you know, having the speaker to me, it’s a  little distracting.

John Chen: Yep. Yeah. If I have a mic and it’s stationary here, my frustration is the amount of space that I can move before I can’t operate anymore. And most people’s is limited and that’s, what’s causing the zoom fatigue [00:05:00] now this, because I’ve I’ve I have this mic around. So I finally hooked it up. It’s it goes to a mixing board, but the key or it’s wireless.

Right. So now I can do all the things that nobody can do, right. And I can actually go around. So my frustration is like, 10 10 times, 20 times bigger than it used to be. Um, and the key here is my vocal quality doesn’t change. Right. What I turned my head and I think that’s something important if you’re a speaker.

Uh, and it’s important if you’re online all day and you’ve got to, you know, talk with a group.

Christina Whitehead: Mine is okay. It’s not amazing. ‘It’s not  bad.  I mean, now you all have been watching it forever, but it’s $39 a year. I can do all the cool nifty things that, that, um, bill was doing. I can change and do my little ultra wide. I can do all of that stuff with, with my camera. I mean with my phone, I can change my, all my white balance, my adjustment.

I mean a clean space. I mean, I have, my space is up-leveled because I’ve got this gray sheet behind me, shining pink lights on it. So people think that I’m doing something cool, but it’s just a gray sheet, but you don’t have to have that. I mean, Katie is in a nice office space bill. Isn’t a nice office space.

Anca Trifan:  Use lamps. Do you have lamps in your house? Start putting lamps around your office and see how that looks. And how does that make the lighting change?  I have this window on this side of my office and I have to constantly balance the lighting out with something else on this other side.

[00:07:00] Carey Smolensky: Lights have, uh, different types of, of settings, of brightness, of different hues. So you can appear very professional, even on a shoestring budget.

Anca Trifan: Don’t be afraid to experiment. Just try it and see how it sounds like record yourself and listen back. And then, um, if that works for you, then go for it. You know, what’s the camera, what’s the audio like? What’s the lighting like and then location. CALLS = camera, audio, lighting, location, speed (broadband).

Carey Smolensky: there’s no one best piece of equipment. It’s, what’s best to suit your needs and, uh, fitting in the pricing that you’re able to

Ella Glasgow: afford. It’s your brand at the end of the day, when it comes to what it is that you’re trying to bring across, there’s a

Jim Bennett: thank each of you for coming along and being part of this.

A Virtual Call to Action

Join VMEA, as a planner, executive, educator, student or as a provider of services to those members active on the site and join all of the complimentary events.  Interact on the site by recommending articles in the virtual journey or posing questions, best practices in the forum for others to see.

We are here to provide the resources you need to navigate the ever-changing virtual and hybrid world of events. 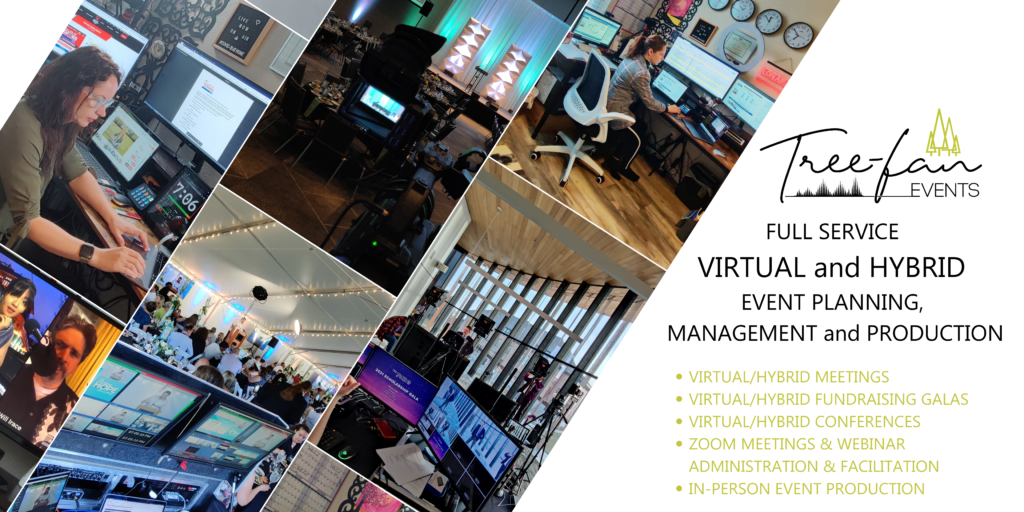